Domingo Esteso is one of the greatest makers in the history of the Spanish guitar. He began working as an apprentice in the workshop of Manuel Ramirez, and upon Ramirez death he worked for his widow, though including his own name on the labels. He ended up working in this workshop at the same time as Santos Hernandez and Enrique Garcia, the three of them becoming the standouts of the Manuel Ramirez workshop. The guitars from this shop to this day have a special quality that sets them apart from all others of this period, be it for their exquisite workmanship or their sonic characteristics.

Later, Domingo Esteso went independent and set up shop at Gravina No. 7 in 1915, with his wife Nicolasa Salamanca, who polished the guitars. This was his most prolific period – one can still find specimens of beautiful workmanship that have had the good fortune to fall into the hands of those who knew how to care for them, and they are played and enjoyed to this day. Many of these guitars were sold abroad, especially to Argentina, where they carry the label he "made for Romero Y Hernandez of Buenos Aires". This was primarily due to the high cost of the guitars and the terrible economic situation in Spain during that period.

Faustino Conde joined the workshop in 1926 and Mariano Conde joined in 1929. This was the beginning of the next epoch of these guitars. The Conde brothers learned their craft and their love of the art of guitar making from Domingo Esteso. They stayed with Domingo Esteso until his death in 1937, in the middle of the Spanish Civil War. Esteso died of a respiratory infection due to an air current in the workshop, which might have been cured but for a lack of penicillin. They continued making guitars until 1939, but very few, due to the civil war. 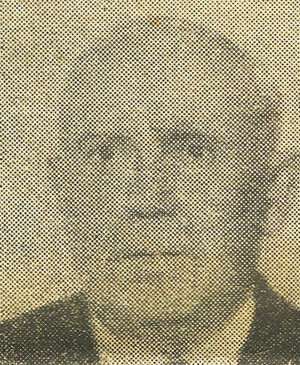 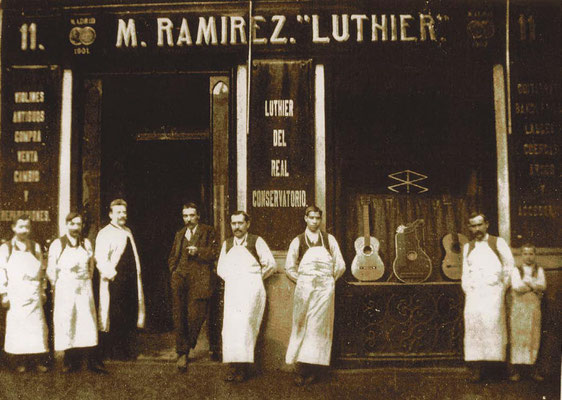 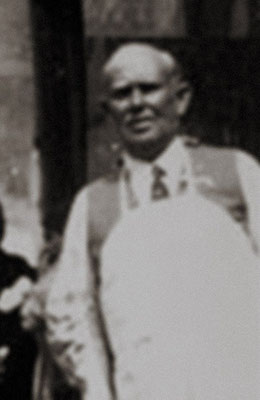 After the Civil War the brothers kept the label “VIUDA Y SOBRINOS DE ESTESO” (Widow and nephews of Esteso) out of respect for their aunt, Nicolasa Salamanca, and they kept this label until her death in December of 1959. In this epoch the third and youngest brother, Julio Conde, entered the workshop.

The brothers continued the tradition of their uncle, introducing only minor changes. Before 1953 they had designed a new headstock for their top model, which came to be known as the “Media Luna” (half-moon), and which they used interchangeably with Domingo Esteso’s headstock. They began introducing new rosettes. This epoch was characterized by the warm sound of their guitars, which was the result of a marriage between tradition and the constant search for improvement in quality of sound and volume.

Over the years, and due to the boom that the guitar acquired, at the beginning of the 1950s they created a new elaboration and attention customers centre at Atocha No. 53 , managed by Julio Conde.

In 1957 they opened the workshop at Pozuelo de Alarcon, Santiago Maganto No. 4 to make their student models, which carried no signature or label. These are the guitars that later came to be known as “guitarras de segunda.”

Among the guitarists who played the guitars of this epoch are Regino Sainz de la Maza, Alirio Diaz, Quintin Esquembre, Manolo de Huelva and many more. 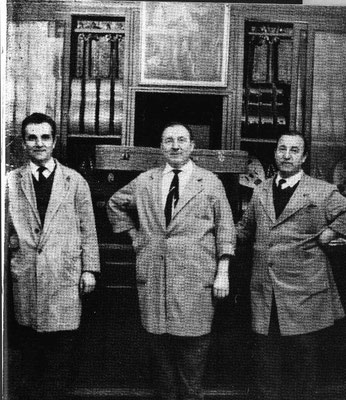 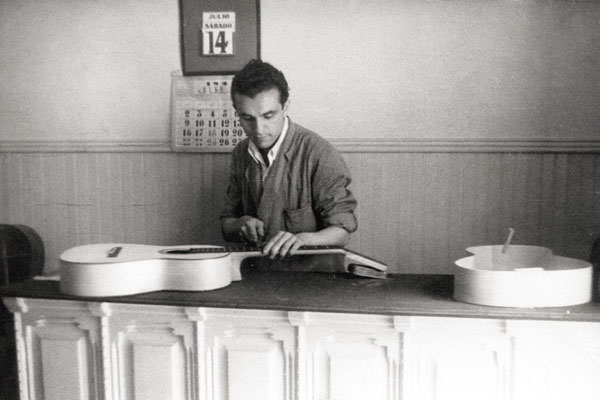 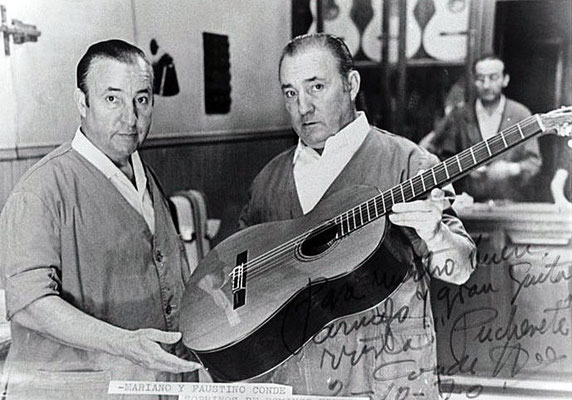 Upon the death of Nicolasa Salamanca they opted to use the name SOBRINOS DE DOMINGO ESTESO/CONDE HERMANOS which was used interchangeably with HERMANOS CONDE/SOBRINOS DE ESTESO.

In 1960 they established the use of the “media luna” (half-moon) headstock for their top of the line guitars, and this became the symbol of the Conde name. They modified the plantilla and the inner bracing of the top of the guitar. They introduced new rosettes that were inspired by designs from the past. They differentiated the classical and flamenco models in the plantilla and in construction, giving them distinct sounds. They achieved a characteristic sound, with great volume and its own personality, which is recognized throughout the guitar world.

At this time the Conde brothers introduced for the first time the use of rosewood for a flamenco guitar, traditionally only employed on classical guitars. This model was made famous by Paco de Lucía as the first flamenco guitar built for a concert setting. In the flamenco world this type of guitar is usually named “negra” as opposed to “blanca” built with cypress for back and sides. In this way a new sound was achieved, with a great volume and own personality widely recognized in the flamenco world.

In 1980 Mariano Conde, established a new shop at Felipe V No. 2 and with his sons began the next phase in the family history. Until the death of Faustino in 1988 they worked in conjunction with the shop at Gravina No 7. From 1988 on the Felipe V shop functioned independently.

The old workskop at Gravina No. 7 was managed by Faustino’s  widow and is closed now.

In 1989 Mariano Conde died, and Felipe I and Mariano II took over the shop. At first they continued to make guitars as Mariano had, but with time and with the improvements in materials, tools and technology they began to innovate, while always maintaining the characteristic sound and the tradition of workmanship in order to give each instrument its history and its own personality.

The Felipe V model, which uses woods that are selected for their beauty, quality and age, and with beautifully elegant detailing; and the Domingo Esteso re-edition and the Viuda Y Sobrinos de Esteso 1953 re-edition which was inspired by a guitar from that year that Tim Miklaucic, owner of Guitar Salon International, asked us to make a copy of. These guitars are made with the original forms and plantillas as the original, and with aged woods.

Many of the guitarists who play Conde guitars during this epoch are the very same ones who had played them in the previous epoch, and who remained loyal to the Conde sound. Added to them were the new generation of guitarists, including Javier Conde, Roberto Morón, Lenny Kravitz, David Byrne, Sergio Vallin and many more.

During this epoch the brand was developed, and taking the Conde name worldwide by going to international trade fairs such as NAMM, Music China, Frankfurt and Japan.

Julio Conde died in 1995. His daughter Carmen manages the shop at Atocha No. 53. 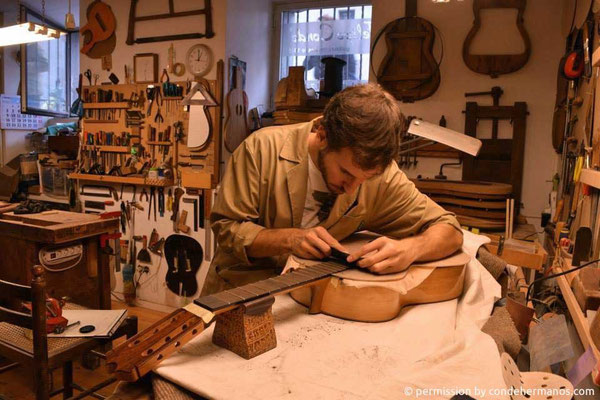 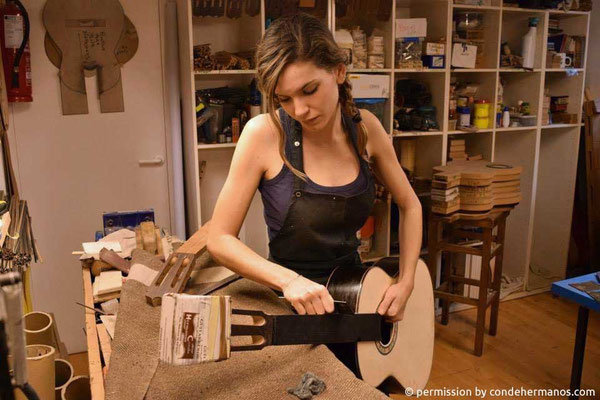 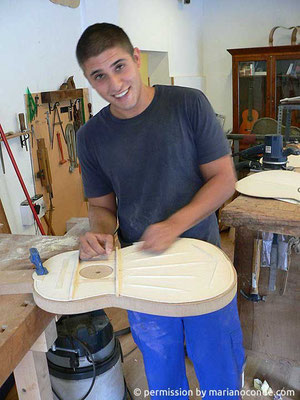 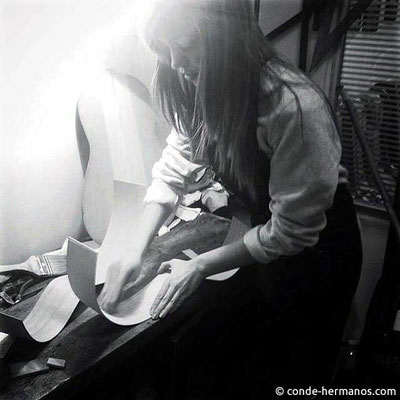 In 2010 the two brothers Felipe I and Mariano II each went his own way and now each sells under his own label.

Felipe Conde I moved to his new shop at Arrieta No. 4, across from the old workshop at Felipe V (which was on the corner of Arrieta). His children Felipe II and Maria joined his workshop.

Mariano Conde II opened his workshop at Amnistia No. 1. Mariano II works together wih his son Mariano III. While Felipe I produces more or less the same model line up – Mariano II changed his business policy and offers now all models - including the cheaper ones - with media luna headstock.

At Atocha No. 53 Carmen and Patrizia run the workshop.  Their instruments still  bear the “Hermanos Conde” label. 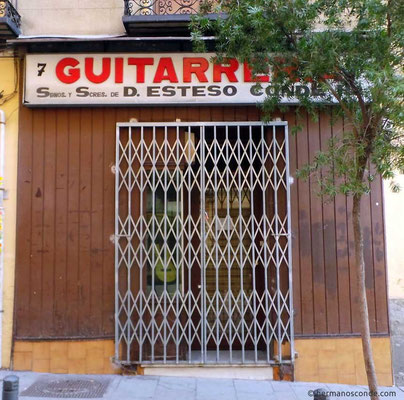 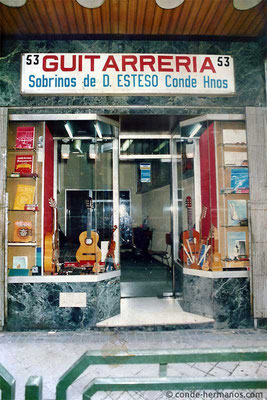 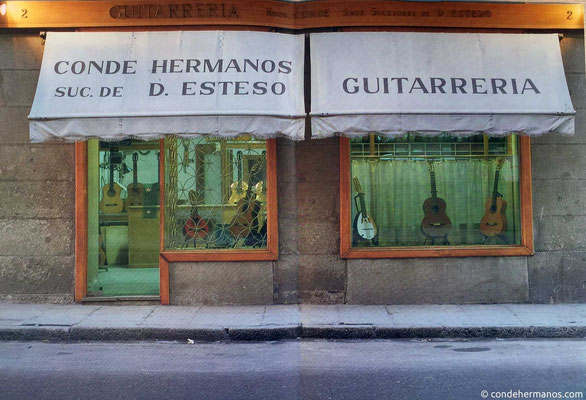 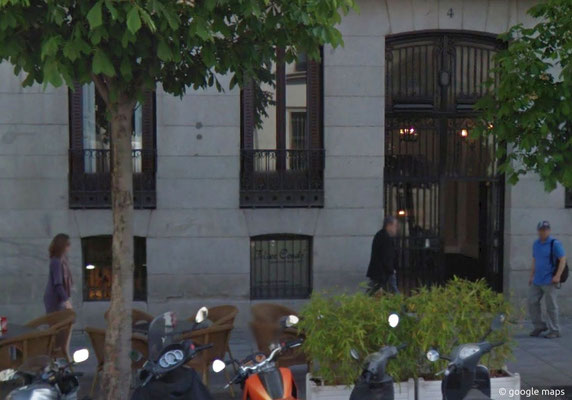